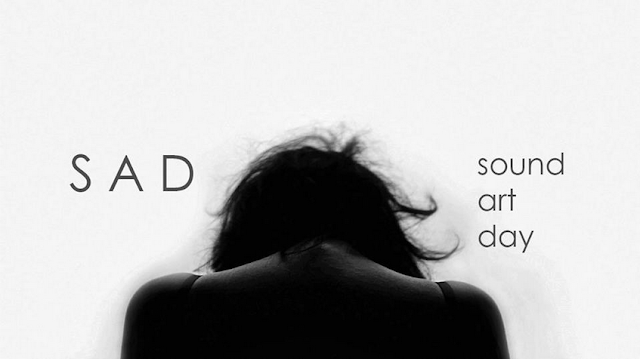 Sound Art Day of Helsinki, or SAD Helsinki, is a joint venture between several organisations, galleries and individuals in the Finnish sound art community. It's aim is to showcase new and old sound art and artists and generate intrest and collaborations inside Finland and internationally through several routes and media outlets.

The SAD project, initiated by MUU - in concurrence with their new international sound art residency and featuring their current resident Bufflo (Devon Bate) from Canada, holds in great value the creation of a common playground for both small and large actors in the scene, it aims at holding an uncompromising stance towards allowing artistic freedom and hopes to enable more artists to present sound art, sound, and music in diverse locations and settings challenging as well as enriching the vibrant scene even further.

The first instalment of SAD, held at Magito studio in Suvilahti, brings to the table a smudging of the lines between music and sound art and a further play between sound and art in general. It presents intriguing works that use immersive techniques as gestures to re-map the position of the audience in relation to elements traditionally perceived as separate. Through an active call it asks that one listen beyond ones sense of hearing into the world where abstract sound is not the only element, and where sounds, symbols, relations, figures, and people exist. In this spot, elements such as performance, narrative, light, and drawing become entangled in the sonic environment, enabling new thoughts and techniques to emerge concerning music or instrument virtuosity, consequences of actions and result, installation duration, fixed media, human machine relations, or recontextualising familiarity infinitely.

Next SAD Helsinki event will be organised 19 September 2015 at Lava-klubi, National Theatre, Helsinki.

A LISTENING ROOM is a place where everyone can come and listen and talk about what we hear. Sessions function through international open calls.
http://aroomwherewelisten.blogspot.fi/

A ROOM is a space contained. Persons are contained spaces too. A ROOM is a small space, almost a dress. It has certain features and characteristics that you will discover spending time in it, and modifying it with your thoughts and your creations. It has been used to write, to draw comics, to build site specific installations.
http://a-room-suvilahti.blogspot.fi/

THIRD SPACE is a collective seeking to unsettle preconceived notions of the other. As cross bordertranscultural operatives we seek to erase the invisible lines that separate us. Armed with the intangible weapon of sound and the understanding of the power of visual culture, we form cracks in knowledges situated around us. Based in Helsinki, Third Space facilitates site specific work focused on sound art, visual art, performance art and spoken word. Collaborations can take the form of workshops, exhibitions, lectures, installations and hacking sessions.(¿as performance?)
http://www.th1rdspac3.com/

A pioneer or Finnish algorithmic art, music and literature. Working with a laptop, drummachine and iPad using custom and industrial software Jukka-Pekka Kervinen immerses us in imporvised experimental elecotronic dance music where the familiar and the unsetling merge.
http://d0x10.randomflux.info/

Civilizations come and go but poverty is always with us. Yet within poverty there is creativity and exuberance in the ability to handle even minute resources non destructively. This ability to think beyond commonly perceived uses of objects and relations is essential if we want to survive the Anthropocene. Musica Povera is a part of an ongoing series with this symbolic at its core. It is a location where objects will approach commonality and togetherness in gatherings of musical sounds and then be released from the grasping hand by the descending voice. These performances are site-specific and use materials found in the immediate vicinity to construct musical instruments, which are played, and then deconstructed, returning them into their original state.
http://www.timotuhkanen.com/

In this work, following the artist’s previous researches on sonic visualisation in live acts, a synthetic pallet of minimalistic musical and visual gestures are generated and recomposed in real time through the performer's body gestures, aiming to involve the audience in a synaesthestic and immersive sensorial experience. Fernando Visockis is a multimedia artist with vast interest in acoustic and electronic music composition, audiovisual installations, digital media and sound art. His audiovisual projects have been shown around the world and he is the founder of partnership named PirarucuDuo, experimental music group named Basavizi, and is also known as FVM aka mochka. His music work is released by the Russian label Kota Records.
http://www.fernandovisockis.net/

Exploring the field of audiovisual performance Arta & Spells Disaster, being Ana Gutieszca and Juan Duarte embrace the sonification of drawing with a music technology approach. Through real time manipulation of analog and digital electronics the audience is guided into a polisensory journey that unfolds a composition of visual and sonic juxtaposition. Ana Gutieszca works with the acoustic qualities of drawing by creating analog & digital instruments, as well as the sonification of graphite and its deconstruction into performance. Juan Duarte focuses on interactive and generative digital and analog platforms producing engagement through art and technology artifacts.
http://www.anagutieszca.com/
http://juanduarteregino.com/

Marko Timlin is a sound artist, composer and musician. Additionally to working with analog and digital electronics, he composes music for plays, choreography, and creates sound installations. His performance centers on custom sensor-based musical instruments, connecting the physical world with the machine world. His work uses components not originally conceived for musical use and are often made out of discarded elements. He is highly convinced that the artistic application of technology is socially significant, as it is exemplary in proving a peaceful and enriching coexistence between man and machine. In performance he proves this by delicately balancing between darkness and light, silence and sound, action and stillness. The Sound-Disk-Machine he constructed in 2014 is a photo-electronic musical instrument that converts light, even non-visible light such as infrared, into audible sound.
http://www.timlin.de/sound-disk-machine

Due to the erratic dissemination of popular digital music, the medium has no dedicated venue. While the theatre, the cinema, and the gallery are venues that provoke expectation and sensitivity, digital music and sound art is left homeless to background noise and desensitized listening. Regressive Disco Theatre is an immersive sound installation that presents the latest work of the Montreal-based project and investigates the effects of this listening paradigm. It focusses on the regress of performance technology and the empowerment of the listener through phenomenological practice. The performance follows a narrative that will last between 30-45 minutes.
http://devonbate.weebly.com/
http://www.bufflo.ca/
Posted by A Listening Room at 10:35

A Listening Room
A listening room is a place where everyone can come and listen and talk about what we hear. Sessions function through international open calls. Like us in social media: @alr_hki www.facebook.com/pages/A-listening-room/480419592063682 or call Timo Tuhkanen +358452795611